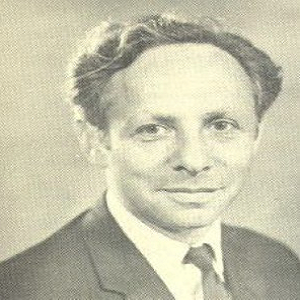 In 1961 a young professor in pathology, named Anthony Epstein, heard by chance the lecture of an unknown surgeon, Dennis Burkitt, who described a bizarre tumor in children from Uganda. This tumor eventually turned to bear his name, and still now is known as Burkitt lymphoma.

Prof. Anthony Epstein’s interest in this tumor, his perseverance, rigorous scientific observations and a bit of serendipity resulted in the first cell culture in suspension from human lymphocytes.  In 1963, a flight from Uganda was supposed to deliver fresh tumor samples into a foggy London. The flight was diverted to Manchester producing a delay in delivery. When the samples finally arrived into London, they seemed useless, containing a cloudy fluid. However, under the microscope the cloudiness was not due to bacteria, as original thought, but to huge numbers of viable, free-floating lymphoma cells. Thus, the first cell culture of Burkitt lymphoma was achieved, designated EB cells. The name EB derived from his name “Epstein” and that from Yvonne “Barr”, a student helping him with the cell culture.

In 1964, using electron microscopy, Anthony Epstein and his research assistant Bert Achong discovered viral particles in EB cells, resulting in the seminal paper published in Lancet 1964, “Virus particles in cultured lymphoblasts from Burkitt´s lymphoma” by Epstein, Achong and Barr.  This was the first demonstration of viral particles in a human tumor. 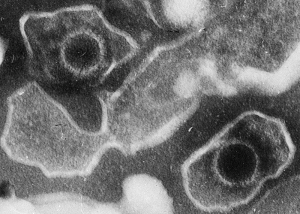 One of the last participations of Prof. Sir Anthony Epstein in a scientific meeting was in 2008 at the international meeting celebrating the 50th anniversary of the discovery of Burkitt lymphoma in Kampala, where his outstanding lecture was listened to with enthusiasm by many EAHP members and young scientists from all around the world. 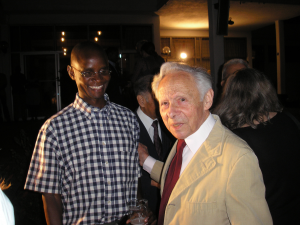 In 2014, the 50th anniversary of the discovery of Epstein-Barr virus was celebrated and still EBV continues surprising us.  We are now about to celebrate the 100th birthday of Prof. Sir Anthony Epstein, who was born on May 18th 1921.  His legacy continues to inspire researchers in the field of lymphoma around the world. Our society takes great pleasure in congratulating him on this special occasion.